4 Behaviours Your Colleagues Are Doing To Get Promoted. 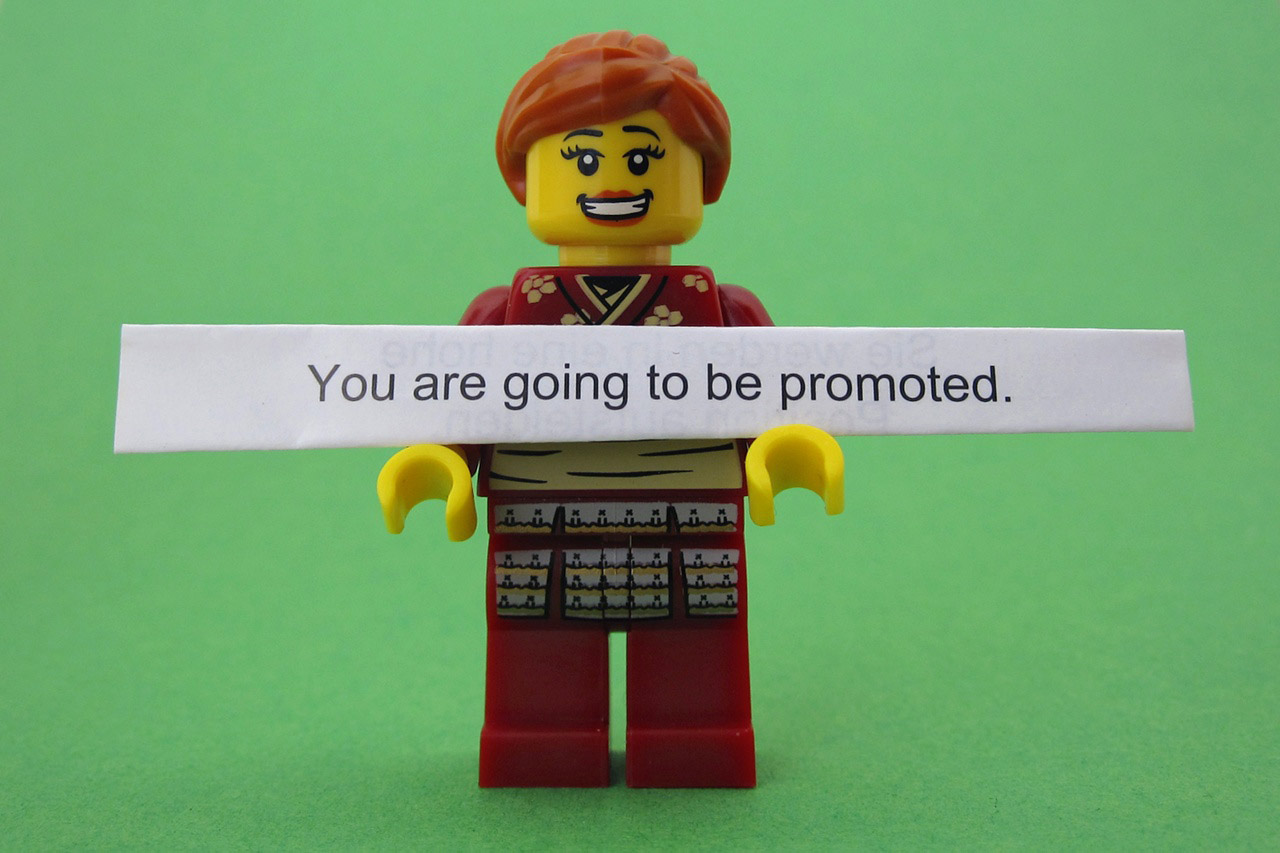 It always fascinates me when I endure watching Big Brother and it features one of the contestants talking to Big Brother in the diary room. At some point the words “she is definitely playing a game” will utter from the contestants mouth in relation to someone else in the house.

It fascinates me because OF COURSE SHE”S PLAYING A GAME! She’s in a goldfish bowl knowingly being watched by millions of people competing for a monetary prize. Why would she NOT be playing a game.

But here’s the thing; we’re playing a game every single day and the workplace is no different. You can change the name ‘playing a game’ to ‘doing human behaviour’ but it is still exactly the same, we are intentional creatures where we act in order to obtain something, whether that be joy, recognition, achievement of some goal.

What Drives Us Humans?

In the very basic sense we are motivated towards pleasure and away from pain. Even if we go through pain, it is to experience a future pleasure. For example, Olympic athletes will regularly go to their limits, experience the pain of waking up with joint pain and the pain of sacrificing other life experiences in order to potentially experience the pleasure of victory in their chosen sport.

In the workplace we aim to avoid pain. This can be from getting sacked, being disciplined or being seen as the weakest performer in the team. We all strive to be valued. A recent Deloitte study on Millenials in the workforce found 1 in 4 questioned wanted to have an opportunity to show their leadership skills. Why? Because of their benefits they feel that can bring both themselves and the company.

The Games We Play

This is an article about HOW people attempt to achieve that pleasure. The games we all play and what you may be able to highlight in others around you. As I describe these, just like when you watch a nature show and see that cute little elephant getting mauled to death by some predator, see these behaviours as neither good nor bad but what we have developed through our evolutionary process in order to survive and thrive.

Call me weird I always look at shoes. I naturally make the assumption if the persons shoes are scuffed and unkept he is a midlevel manager at best. Females are different because generally they are more in tune with the importance of great shoes.

Lets get something clear, how you dress and present yourself is important. Unless you work in the culture of casual where people come in with hoodies and board shorts, how you look will determine others perception of you. So walking around with your shirt out and shoes looking like you’ve been jumping in puddles isn’t going to go unnoticed.

We Act What We Wear

The advice of ‘dress for the position you want to be in, not the one you are in’ is not just a platitude it also has a bearing in science. In Phillip Zimbardo famous study, he showed how normal college students can act the role of police officer and prisoner when they donned the appropriate attire. The study had to be stopped early after the students who played the police officers went too militant for the study to continue to be deemed safe!

If you need any more evidence of the power of presentation , just look to a few weeks ago when Barack Obama was addressing the nation about the latest troubles in the Middle East. However the reaction was less about his message and more about the tan suit that drew comparisons with a second hand car salesman!

Takeaway: If you are not paying attention to how you present yourself, you are at a disadvantage to someone who is and will be a factor in how you are seen in the company.

One of the reasons solitary confinement is such a useful means of punishment is because it completely goes against what we are naturally predisposed to do, which is to be a part of a tribe.

Studies have shown that we recover from illness faster when we have a close social network and unemployment tends to be low amongst church communities due in part because of the opportunity for work found within the community.

This advantage of networking is not lost in the workplace. Primatologist and author of ‘our inner ape’ Frans De Waal says the human workplace is no different to the animal kingdom (considering we share 96% DNA with apes) and the key to getting ahead is building a network.

In an article for National Geographic De Waal states:

In the workplace, it is rare to get a promotion if the main decision makers dislike you, and also if they don’t even know you exist!

Competency is NOT enough

But what if you’re a hard worker, doesn’t your competency play a part? Sure it plays a part, but it’s not the only factor. The amount of times I’ve seen a colleague working all hours, eyes glued to the computer screen and yet being in the same role years later. It is no coincidence that these individuals tend to not engage in office interactions outside of the job role.

If you are an introvert who also happens to be shy, this can pose a problem. You want to get ahead, you work hard, but up until now haven’t seen the need to build alliances. By tweaking your mindset around this, you will find yourself in a better standing for promotion.

Takeaway: Don’t rely on just hard work to get you ahead. Hard work should be a given. Build your alliances by providing value to the people around you. Show your worth and become indispensable.

Recently I was told a great story by a friend who works in a large telecommunications company. She was complaining about a guy who she found annoying because she felt he didn’t do as much work as her and would always be brown nosing the management. She talked about one particular occasion where he came in on a Saturday and commented that it was only because the ‘top managers’ were in that day as well.

She was pissed off because he actually got promoted!

Yet take a step back and you begin to understand this is entirely natural behaviour. If you were to observe chimps in the wild there is a hierarchy with the leaders and then the lower level chimps.

Now in the human world, stroking and licking in the work place is normally reserved for office Christmas parties and sexual harassment cases, but the grooming ritual still remains in the form of ego boosting and acts that are to the benefit of the leader.

Hence why the guy came in on a Saturday, he wanted to show his boss he was working hard for his benefit (equivalent of a belly rub in the chimp world) to increase the chance the boss would return the sentiment later (in the form of a promotion maybe!).

Takeaway: Recognise who the decision makers are. Stand back and observe how your workplaces works. Who’s in groups with who? Who needs to know what contribution you are making & do they know right now? Do NOT brown nose them, but do make sure they know who you are by what you contribute.

There is a certain look that results in promotion. Now the loud, swaggering, high energy persona can work because it can create a perception of ‘if they’re so sure of themselves, they must be right’. However if you’re not that type of person, that’s ok because you don’t have to be that person. You do have to show high value though. This is sometimes called high status, as opposed to low status.

When I talk about high & low status, it is understandable that you may have this impression of some loud arrogant, brash high school jock type of individual that I want you to turn into. That couldn’t be further from the truth.

High status is: Owning your space and not willingly giving it up to anyone

When a leader walks into a room you know he/she is a leader just by the way they walk into a room in relation to others around them and how they carry themselves. Politicians are trained in this so watch the top leaders and you’ll see what I mean.

In your case I like to call it ‘respectful posturing’. Let me give you an example to show my point:

The Situation: You walk into your boss’s office and he tells you to sit down. There is a desk between you and him. He puts his feet on the desk, leans back in his chair and asks you what you think the company’s marketing strategy should be for the next 6 months.

Response 1: You follow suit, put your feet on his desk, lean back and respond “Thats a great question Dave and I think we should be aggressive and show we’re a strong brand”

Response 2: You bring your knees together, have your hands on your lap and hunch over with your eyes to the floor and say “umm, thats a good question Dave and and er, I think we should be kinda aggressive and show we’re a really really strong brand”

Response 3: You sit back in your chair, your back is straight and your hands are comfortably on your lap and you look at your boss in the eye and say “thats a good question Dave, firstly we need to show we’re a strong brand and we should do this by being aggressive in our approach”.

Which one do you think comes across most favourably?

If you chose response 3 you’d be correct.

Response 1: you have matched his posturing, but he is in a higher position as you so the boss is likely to see this as a challenge or neutralising of his position, both he won’t take kindly to.

Response 2: you come across as being scared of your own shadow and as a result your message is not going to come across with the certainty and intensity it requires.

Response 3: you are holding your position in a confident manner but not disrespecting the position your boss holds and as a result your message will come across with a certainty that shows he was right to ask for your opinion.

The beauty of this is it is posturing that can be adopted as an introvert. Its not loud, its not in your face, its confident, composed and its a strong foundation to deliver your message with impact.

Takeaway: Walk overs rarely get promoted. Ask yourself how you come across to people. Own your space and make your own decisions with certainty.

We are humans and there are common patterns in which we operate. The workplace is the human version of chimps in the wild. When you recognise it, you’ll see the above examples everywhere!

What about You? What are some common behaviours you experience in the workplace?